I was in Bristol last week for work, I love Bristol. I went last year for the first time to run the Chippenham Half Marathon. I decided on a whim i wanted to race sometime in September and as luck would have it the Chippenham Half Marathon was on and it was super cheap. Entry fee, travel and accommodation set me back around £60 and considering some races in London are around £30-50 for entry alone, it was money well spent.

Bristol is a great little town to get lost in and for a serial solo traveller like myself its perfect. I didn’t get much to time to wander seeing as I was on the clock per se but the venue where I was working – Kongs of King Street – was right bang in the middle of all the crazy fun stuff Bristol has to offer

The great thing about Bristol as I was kindly reminded by a graffiti artist, is that no bar/pub worth its salt would survive in Bristol without craft beer of some sort and Kongs not only had it by the tap but also by the dozen. I helped myself too a couple pints of cider, which went down pretty well, wish for the life of me i could remember the name of it, but i guess the fact that i don’t says’ a lot about the alcoholic contents – hic.

Anyways, onto the food. Short for time and rushed off my feet i went for The Kong pizza which was spinach, bacon, roasted cherry tomatoes, finished with a fried egg on top. On paper it’s my kinda pizza, great balance in flavours but taste-wise it was lacking a bit of punch. I expected the bacon to be fried and super crispy instead they tasted a bit bland and dare i say boiled? The egg was cooked to perfection and splitting the yoke with a knife and allowing all that rich yellow goodness to ooze all over the pizza was definitely a highlight!  Look, it wasn’t the best pizza I’ve ever had but £9 you get a pretty big pizza and an even bigger selection of beer to keep you occupied.

I’m not in it for the medals, running for me is a solitary experience. I’ve tried and failed to mediate and i guess running is the closest thing to it. It’s the only time in my day where my thoughts are unfiltered and my time uninterrupted by the demands of life and those around me. It doesn’t really matter how far I run or where I go, all that matters is lacing up my shoes and running out of the door.

I’ve never been much of a birthday celebration kind of guy, I think it stems from the fact that I don’t have many friends, the way I see it why bother celebrating your birthday if you have no-one to celebrate it with? Things were a bit different when I was younger too I guess. Mum didn’t do presents, instead she’d bake us a selection of marble sponge cakes in all different shapes and sizes. But as of late (the last 10 or so years) Mum stopped making an effort, the celebration aspect of it all came to a standstill. In part it had a lot to do with our lack of finances. My parents went through a rough time with work and money; they didn’t have much of either back then. And looking back at it I guess they stopped making us birthday cakes because they realized we figured it out, the cakes were a substitute for their inability to give us what we really wanted at the time – clothes, trainers and computer games. But I doubt that would have changed my view on birthdays, I still think it’s a huge waste of time; it’s just another day. My time is better spent reflecting on the previous year and making plans for the next.

But fast forward to the present day and I’ve come to accept that even if I don’t enjoy people making a fuss of my birthday, I do enjoy going out of my way to recognise someone else’s. A couple weeks ago my girlfriend and I celebrated our birthdays. We’re five days apart which is quite gnarly. But I guess that’s where our bday commonalities end.

For her birthday I decided to do away with gifts and take her out to dinner. To be completely honest we both decided not to do gifts and I gotta say I didn’t fight it. As a red-blooded male I find the thought of battling weekend shoppers in hope of finding something she’ll like for under a tenner daunting. Obviously it’s a joke, but give a man all the money in the world I’m still certain some would struggle finding a present their other half actually wanted, without referring back to the fail-safe options of ‘something shiny and something expensive’. So having to pick out a reasonably priced, trendy restaurant, serving great food in was right up my alley. 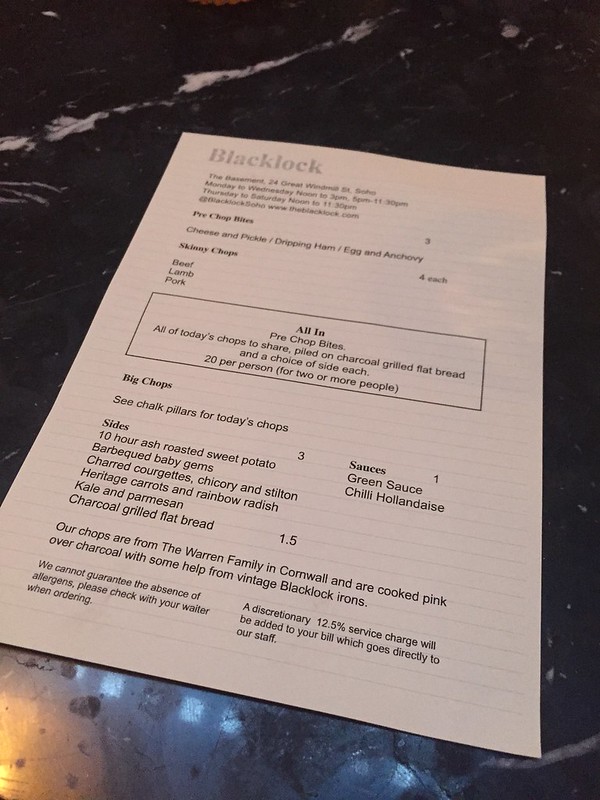 Enter Blacklock, Soho – Located a stones-throw from Piccadilly Circus Blacklock is the work of a group of former employees of Hawksmoor. Back when I was employed by the swoosh (#fucknike) we were treated to a dinner to celebrate some nonsensical thing or the other at the Hawksmoor. The food was great if a tad on the pricey side and if anything the introduction of Hawksmoor led to my appreciation of food on the whole.

Finding the Blacklock was a tad more difficult they I envisioned. We ended walking up and down the same street for ten minutes trying to find it to no avail. Bouncers and random’ strangers were no help either, as neither seemed to have heard or known The Blacklock existed prior to me mentioning it. At that moment I went primal and decided to do away with my trusted smartphone map and instead use my eyes; heaven forbid. And lo and behold thirty-seconds later we find The Blacklock courtesy of a fairly well displayed sign on the door leading towards the basement. How we – better yet I – missed it I’ll never know, I guess I blame the suns reflection on my iPhone screen, it’s got a way of fucking up my geo-location thingy more often than not.

We started off with a selection of Pre Chop Bites for starters which were canopies of cheese, pickle, ham and egg served on a lovely wafer thin cracker. They were the perfect size for a ‘chuck and chew’ and some of the combinations – the Egg and Anchovy being one – were amazing on the pallet. I never usually order starters and to be honest I didn’t think there was much of a point of them being on the menu, but that all changed after a couple mouthfuls. I’d gladly go back for the starters alone. 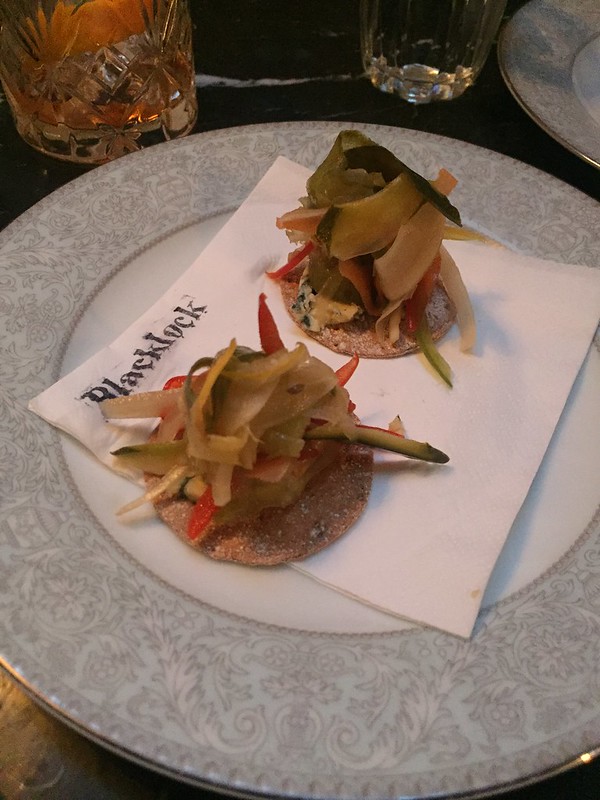 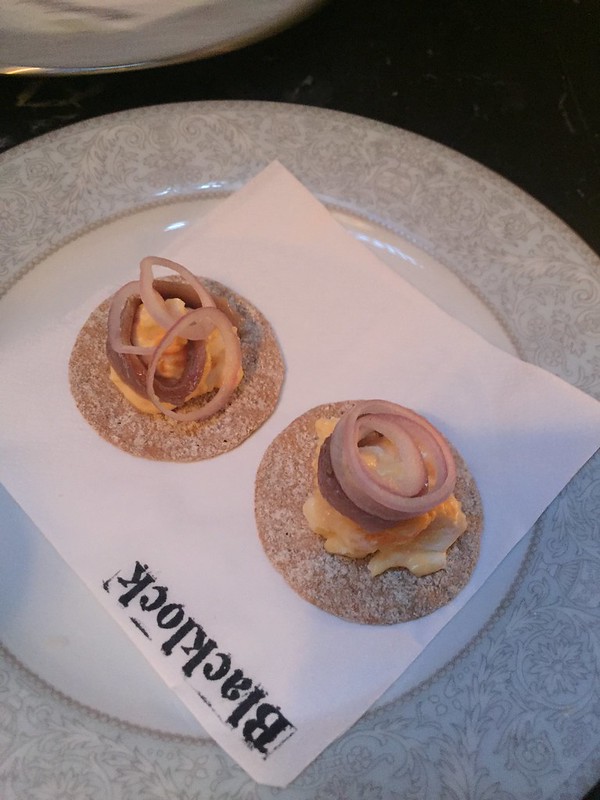 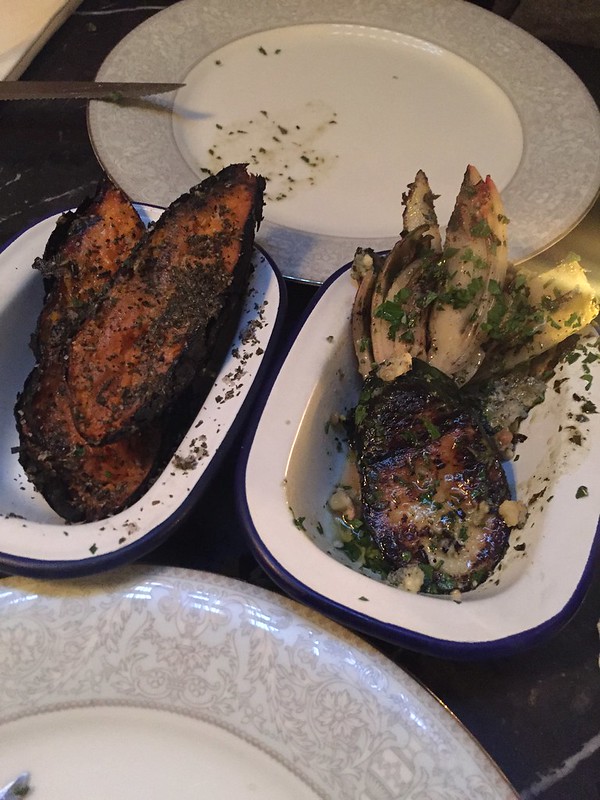 The All In platter is great, the lamp chops – my favourite by far – were succulent and seasoned to perfection. It’s been a long time since I’ve eaten meat of this caliber and much of the time was spent licking the bones dry, which is always a good sign. The beef chops were little too dry and chewy for my liking, the pork was okay but was a tad too fatty for my liking. 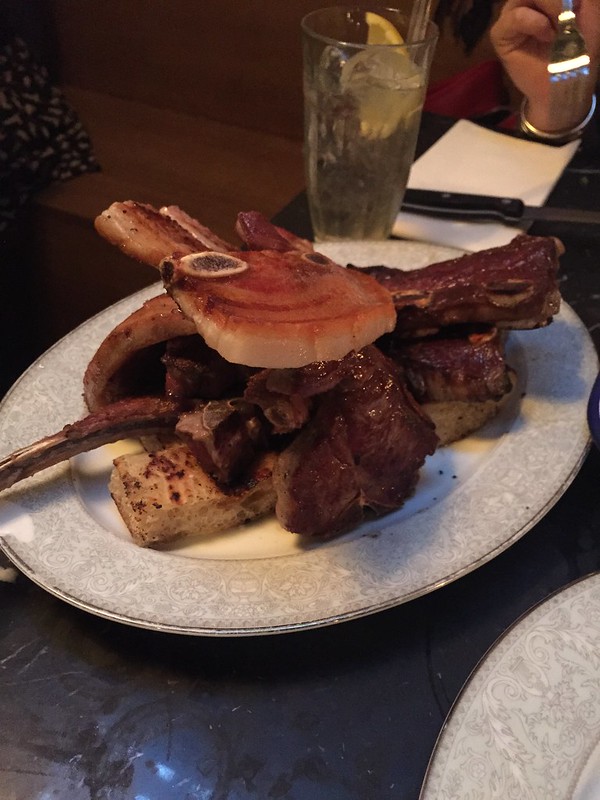 Blacklock is great little basement restaurant that does exactly what says on the tin, great meat at a great price.  Hopefully they build on the sides and offer a couple other alternatives, or better yet cook the sweet potato san burned-black outer skin, the potato itself was perfect but I love the skin and it was a bit disappointing to leave it behind. Although the waiter informed me at the end that it was safe to eat, so maybe I missed a trick there. Oh and before I forget, the drinks on offer were great on the alcoholic content but not so great on taste. So if you’re picky about that kind of thing it might better to order off-menu or just stick with some beers. 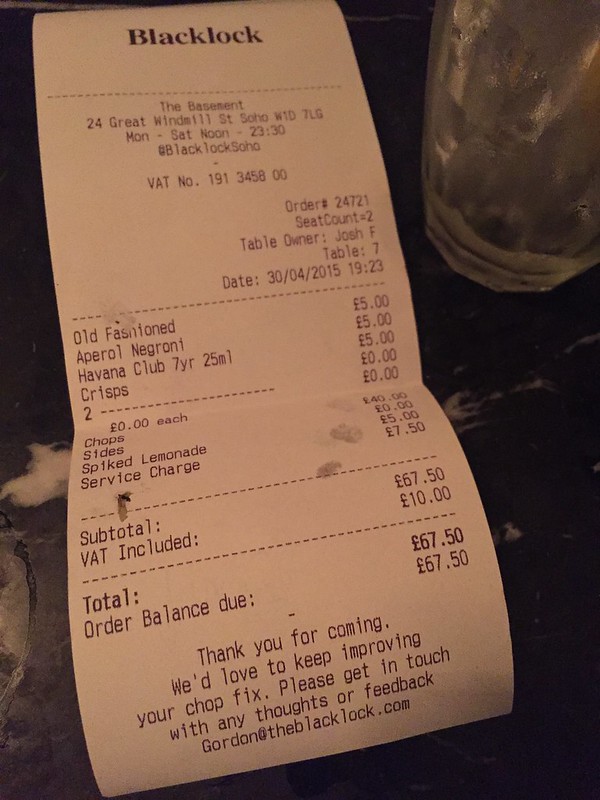